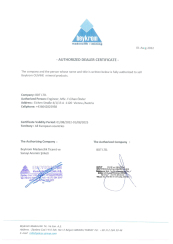 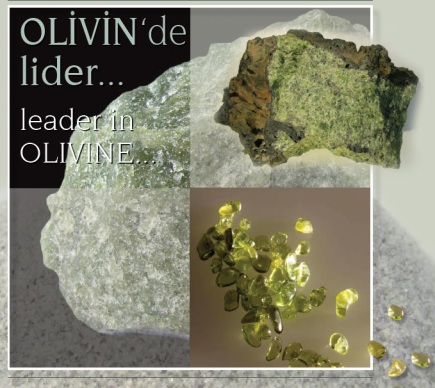 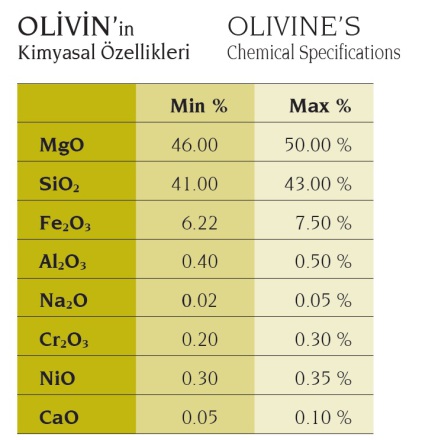 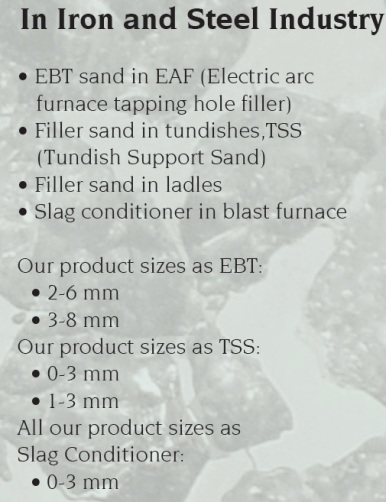 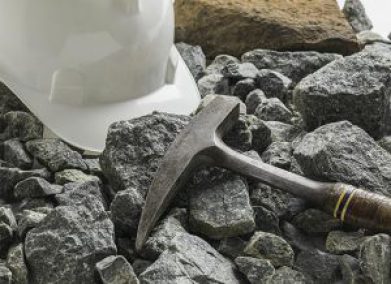 Olivine is a mineral that contains a mixture of forsterite (more than 90%) and fayalite in solid solution with beneficial properties such as a high melting point, high density and high magnesium content.

Olivine is used in the following areas ;

Iron and Steel Industry: The most important use of Olivin today is the iron and steel industry.

In this industry, olivine is used as a dispersant and slag regulator in blast furnaces. To produce steel, irregular iron stone and coke are used in blast furnaces. But the ingredients of this order are not pure enough. For this reason, the raw material placed in the blast furnace must be properly melted and mixed into the slag.

As a solvent, olivine has an important role in fusion, which is necessary at the initial stage. The addition of olivine increases the MgO value, and therefore the viscosity of the slag. The high MgO value of olivine activates the slag viscosity in the blast furnace regardless of the composition of the ingredients. This is another advantage.

In addition, olivine is an important aid in sintering. In other words, the use of olivine in sintering plants reduces the degree of sintering and therefore the consumption of coking coal decreases and the capacity increases due to the increase in the rigidity of the sinter. This process also ensures the homogeneous distribution of iron minerals in the furnace, allowing impurities to be removed from the environment more easily.

Another feature of Olivine is that it prevents the combination of alkalis from the stove.

Blast furnaces in the iron and steel industry, the cement sector and many furnaces that require high temperatures use these bricks as internal bricks. They are also used to produce many refractory materials.

Olivine is also used to coat the inner face of pots. Since olivine is not very resistant to slag in blast furnaces with high CaO, it is generally used in less hot and bottom parts of blast furnaces. Steel material containing olivine cools more quickly.

Casting Industry: Essentially quartz sand is mostly used in the casting industry. However, in troubled situations between mold and cast metallic material, molds made of olivine are preferred. During casting, quartz sand reacts with metal, while olivine does not react with metal. Since silica sand causes low melting temperature and therefore steel sinters on sand, only molds made of olivine are used, especially in manganese steel casting. Therefore, on the surface of the steel, first burns and then holes will occur. But olivine does not form low temperature with manganese steel. In casting production, chromium and zircon can be added to olivine sand from time to time in small proportions.

Olivine's advantages over silica sand in the foundry industry include:

Use as an abrasive agent: In many countries, Olivine is used to clean the surfaces of buildings and bridges. For this purpose, olivine is sprayed with compressed air to remove dirt, rust and similar unwanted substances on the surfaces. The pneumatic powder olivine is also used to obtain flat or rough surfaces or to cut any part of a building or décor. Before 1988, it was made with silica sand, but it was banned due to its harm to health and olivine was started to be used because it did not contain free silica.

Using as an electric heater: These heaters are called "Night Storage Heaters". Bricks made of olivine, designed like radiators, absorb and store heat and heat homes, emitting warmth, especially during the daytime.

Use as ballast material: Olivine is used in areas where equilibrium function is required due to its high density. Oil platforms in the North Sea use olivine to balance the platform. Olivine fills the pores of the concrete of the platform and helps to balance the function with its weight.

Olivine pebbles are used in railways to provide a solid and balanced ground. Relatively angular and solid gravel provides good drainage and prevents the railway from slipping.

Our contracted facilities have a capacity of 3000 tpm for both EBT and TKD sands and 500 tpm for each AFS size product. These products are available for sale in different countries: according to customer requests with or without pallets.